Let me tell you about fractals.

Fractals are a writer’s best friend, and our first stop on this little ride called theme. A fractal is a rose by many names, and sometimes it may even literally be a rose, but for me, they are the DNA of writing.

Let’s look at a literal fractal for a second, because they are super pretty.

Now, the definition of a fractal is (according to Google):

“a curve or geometric figure, each part of which has the same statistical character as the whole. Fractals are useful in modeling structures (such as eroded coastlines or snowflakes) in which similar patterns recur at progressively smaller scales, and in describing partly random or chaotic phenomena such as crystal growth, fluid turbulence, and galaxy formation.”

For the less mathematically inclined among us – present company included – that’s pretty dense. So let’s break it down.

Basically, a fractal is anything that resembles itself at all levels, but may not be the same exact shape. So in the above image, all of those pretty drawings are the same, but only statistically.

For the purposes of writing, let’s change “Statistically” to metaphorically, and get this show on the road.

When writing Fractals – especially thematic fractals – you are writing something that appears in the same basic configuration from the tiniest line of dialogue, to the largest set-piece. One of the most famous fractals is Freitag’s Triangle, or your good ol’ horrid buddy: Three Act Structure.

But that’s still a little dry and technical, so let’s use a practical example: The mothahfuckin’ Wire. The Wire is the epitome of fractal narrative, which is why I would argue that it’s the best TV show ever, and plenty of pretentious people agree with me. The streets as portrayed by David Simon, and the Docks and Government and Education and Media is such a powerfully told story because of its use of Fractal narrative.

The very beginning of the pilot episode could easily be called an overture. But let’s call it a fractal of the series to come. Please watch the whole scene (intro song included) below, before going further. If you’re a wire douche, you can continue.

Now this scene does not look like the rest of the series literally: it features two characters talking at a crime-scene. But it sets up the theme of the entire series metaphorically: the game is rigged, but you gotta play because “it’s america man”.

The Game is the primary motif throughout the series and manifests in different ways. It refers to the drug game, which dominates the locale of west baltimore; but it also refers equally to the police department; the stevedores union; City and State Government; Public School; and, finally, the Baltimore Sun.

In the scene, Royal Irish A-Hole Jimmy McNulty talked to a nameless stranger about “Snot Boogie” a boy nicknamed for his shit-luck one day out in the cold, who gets murdered by someone for doing his usual thing stealing from a craps game.

McNulty tries to piece together what happened, and concludes that “Snot-Boogie” always had the choice to just not rob a craps game. But his companion tells him that that’s irrelevant, because it’s america.

Throughout the scene we’re being given a thematic overview of the series to come: a character will come upon a good – if morally problematic idea – and will decide that the promise of a better life is worth more than the shit they’re in. It’ll go well, and they’ll start to involve more people. But then it will attract the wrong kind of attention. In their attempts to stop the attention from gathering, they doom themselves like tragic characters against the unstoppable grinding machine of institutional bureaucracy, and get crushed to feed it. Destroyed for taking a chance, when they knew they were fucked. Then life continues without anyone taking notice.

Because that is the plot of each season (and, incidentally Freytag’s triangle), the fact that each season is a self-contained story, part of a larger story doesn’t matter: it’s easy to follow. You just have to pay attention.

But that opening scene never tells you that directly. It is the motion of the narrative that lets you in on the secret. It’s practically subliminal. That’s the thing about fractals, when done right: They’re not obvious.

If you watched the Wire without knowing that that you would see the above plot be the A-Plot for every season – and practically every character – you would still be able to follow and enjoy it. Knowing that it operates as a series of shapes that aren’t the same, but similar expanding outward infinitely only enhances the ease with which you can watch it.

And if that weren’t enough, you have the theme song: “Way Down in the Hole” which is about not being tempted by Satan, if you want to be saved. Although Simon is openly against obvious musical cues, this one is ironic in the context of the show: When you follow the devil in The Wire, what you want will often happen, but you’ll be fucked anyway. It is a metaphorical reinforcement of the entire theme of the show.

From the Fractal, you can glean the theme: Fate, Tautology, and Chains. Or even Self-Destruction. The fractal in this case is so large, it can be applied universally, and create a rich tapestry of potential themes.

Now, if you’ve never seen The Wire, the above will make no sense to you. First off, shame on you, go watch The Wire. But you can do the above with just about any show.

So, your homework assignment, before we continue this conversation: Find a TV show, Musical, Movie, Book, or any other piece of narrative art you really love, and tell me what the fractal of that show is.

Leave a comment on this article, and we’ll continue our discussion of theme, next time.

I can’t wait to hear what you got.

Life is the ultimate unknown unknown. I’ve decided to start a blog about nothing. Though I’m not as cleverly nihilistic or compelling […]

I wonder if I would censor myself if I knew anybody was watching. That feels like the common stream of existence: you’re […] 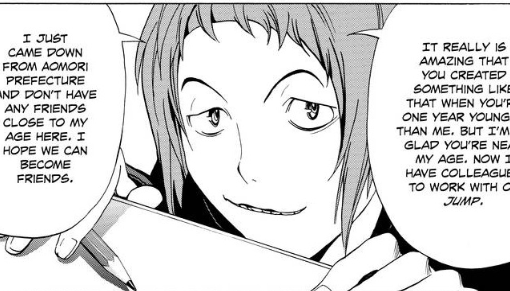 Here is Chapter 18, in which Rivals are discussed.

Howdy hoe my internet neighbors. Welcome to the newest exciting read-through of Bakuman. Today we cover Chapter 22: In The Way and […]