Hi everybody, this is Eric (obviously), and this is going to be me reading Bakuman from Chapter 1 through its conclusion in Chapter 176.

I’ve been looking an excuse to use my website, and this excuse is as good as any, so welcome: I hope you enjoy your stay, and my words; whether they’re good or not is entirely up to you. Hopefully they are.

And on that slightly meta-note, some rules:

I will write a short summary of the chapter for each of these read-throughs, followed by my general reaction to it. If it’s particularly dense, I’ll add lots of detail. Otherwise, I’m just going to give my reactions as freshly as I can manage.

On this reaction: Dreams & Reality. Woof.

Moritaka Mashiro (a.k.a. Saiko Mashiro) is a 14 year old boy who is noted for his ability to draw well. He is visited by his uncle Taro Kawaguchi who comments on the award he has recently won for his ability signed by the Minister of Education and how he’ll be a designer or figure painter; he notes that his Uncle has conspicuously left out the possibility of being a “Manga Artist”.

As Mashiro’s middle school career comes to a close, he recognizes that if he wants to lead a stable – if boring – life, he will have to apply himself to his studies. He is not enthused by the idea of joining the workforce, but recognizes its necessity for stability. Meanwhile he sketches his crush, the reserved Azuki Miho from behind noting that his crush is impossible to act on, and only causes him pain.

Even though he finds the whole process meaningless and miserable, he goes home to study so he can get into a decent high school. The only problem is his math book is missing…which happened to have the sketch of Miho in it. Even though he doesn’t care that much, to avoid risking embarrassment he goes back to school to pick it up.

Once there, he meets with the class genius Akito Takagi. Takagi has taken the notebook, and has observed both Miho and Mashiro’s mutual interest. He offers the notebook back, on the condition that Mashiro join in him drawing Manga.

Mashiro refuses outright, explaining that being a popular Manga artist is a crapshoot; and that the best Manga Artist have to be gifted geniuses, or else it’s just gambling. After explaining the difficulty of becoming a Manga artist, he reveals his uncle Taro Kawaguchi was a Manga artist, which is how he knows all this information. After some cajoling, Takagi gives him back his notebook, but Mashiro refuses claiming he wants a normal life and nothing more.

Back at home, he reminisces on his Uncle in his studio. Taro explains that he became a Manga-ka to attract a girl on whom he had a crush in middle school. They exchanged polite kind letters throughout the years, but he never made a move. He hoped that by pursuing the arduous task of writing Manga, he would attract her notice, and she could watch him. Mashiro notes that his Manga was successfully turned into an Anime; but it was too late. The show only aired when they were both too old, and the girl had gotten married. Mashiro reminisces on the Manga that failed after Taro’s one success and his death from “Overwork”, which he suspects was a suicide. His mother scolds him for playing video games instead of doing work and he silently freaks out over everyone wanting to take control of his life.

At that moment, Takagi calls, claiming he will be confessing to Miho soon, and that Mashiro needs to join him for confidence sake. Mashiro agrees just to see Miho, but silently lamenting his inaction, and they go to her house.

At her house, Takagi’s intelligence is well-known enough that Miho’s mother allows her to speak to him. Takagi reveals that he knows she wishes to be a voice actress for anime, and that she has already attracted attention. Mashiro wonders what she looks like outside of school. When she comes out to say hi to the two, Takagi confirms his suspicions that Miho and Mashiro are attracted to each other, and says that they are to become Manga-ka. She walks over and expresses excitement at the proposition.

In the heat of the moment, Mashiro asks Miho if she will marry him when they achieve their dreams. After a long….really really long moment of awkardness she runs back inside. Just as all hope is lost, she communicates that she will marry him; but only on the condition that they both achieve their dreams. Mashiro remembers his uncle’s fate, but sees a ray of hope, as he has already gotten a proposal from Miho, should he succeed.

With that, Mashiro agrees to team up with Takagi to become successful Manga-ka, and marry the girl of his dreams.

Anything can be a story man.

I’m really drawn to this series’s premise for a few reasons. First, I love boring things; and I can think of nothing more boring than the actual process of drawing Manga. Boring, and exhausting.

Second: it’s super fucking meta. For those unaware, this series is the follow-up to Death Note by the authors of that Manga; so for the series to make Meta-Jokes this early on has already gotten my inner meta-squee going on, and who doesn’t love that shit.

But it’s not even the actual joke about Death Note, it’s also the set-up of the Manga itself. Despite hewing closely to all the good-ass shonen tropes – from blonde haired rival-ish douche character to the call to action to be the very best like no one ever was in {insert field here} – to the main character being an insecure shonen, it’s all there.

But it’s focused on art work, drawing, and sitting around being entirely undramatic.

Y’know, like Death Note. With the exception, perhaps of dramatic Potato Chips.

Man, I really don’t know how to feel about that shit.

But it’s perfectly within the Manga-ka’s wheel house. Writing shit down…dramatically. But where Light Yagami is posing some hashtag deep moral questions about the nature of goodness, Mashiro is highlighting something quite a bit more serious, and quite a bit more real: art is hard.

One of the chief appeals of Shonen Manga is the opportunity to escape from real life. To indulge in a dream where people are super-skilled, and only need their super skills to win the day and be happy wonderful fulfilled people. Whether that be with Magic Grimoires, Super Heroism, Ninja, Samurai, Shinobi, uhhhh, Science (Dr. Stone is the absolute shit by the by); Manga – and by extension most genre work – is an opportunity to indulge in a non-real skill based fantasy that takes all the ugliness out of those professions…the ones that exist at least.

And I think in the real world, few positions are so idolized as those of the entertainment industry. For good reason to: we fucking worship entertainers. While Ursula K. LeGuin had the right of it (we shouldn’t do that), we treat entertainers – from filmmakers to writers – as being some kind of special. They get to spend time in fantastical worlds doing fantastical things.

That’s why the professions are so sought after; they provide a fantasy of fulfillment escaping from reality. If you could make movies, wouldn’t you be happy? Getting to wear suits of armor and be awesome?

But that shit is sausage, and the saying about sausage is that you don’t want to see how it gets made.

And this series is all about the sausage being made for Manga, which is an absolutely BRUTAL industry.

Even the most cursory glance at an anonymous Manga-ka schedule for writing a Manga would make even the worst insomniac workaholic sputter. Manga is a truly ride-or-die job, and the framing Mashiro gives it as a “gamble” is also the case.

And it’s not like this fucking insanity is exclusive to drawing comics. At the end of the day, entertainment work is still work. It maybe hella fun, and hella rewarding; but you’re still going to be pulling some brutal shifts, and doing hellish work on what amounts to a gamble.

And that’s a neat little twist.

Those escapist fantasies have a similar problem: being a shinobi would likely suck a bag of dicks if you actually did it. Being a superhero would involve crap hours, and almost certainly some industrial grade PTSD. But it’s nice to dream about.

And so this story chooses to look at the reality of the dream factory; and man, if that ain’t the shit I love most, I don’t know what is.

So far I like Mashiro. He’s just generically shonen enough that he’s likeable, maybe a little more dour than most; and Takagi works well as his Type-A borderline psycho foil character.

But so far the best trick has been the subtle (until the last moment) parallel between Mashiro and his Uncle.

Mashiro’s conflict is not whether he wants to be a Manga-ka or not: it’s whether he wants to end up like his uncle. That fear is a compelling motivator for him not to. and it makes the campbellian refusal of the call feel a lot more real than others.

There is this shadow of knowledge hanging over him. This isn’t like Luffy blindly moving towards the Pirate King assignation: this is a guy who knows that Manga pays per page and that you have to sacrifice your life for it. The call to action is for something that you have to be passionate for, and willing to risk things for.

So when, at the end of the chapter, Mashiro’s dilemma becomes inverted: when his dream of getting his crushes attention happens, it makes for a lovely little twist on the parallelism established between him and his uncle.

It doesn’t hurt that Mashiro is worse than Ted Mosby by a demonstrable few hundred thousand miles of awkward.

And I know that, in taking this route, I’m going to get to see some real Manga work, which interests me. I love seeing how the sausage gets made. especially when it’s so goddamn meta.

The fact that this series takes place in the “real world” amuses me endlessly. Does that mean the sketch of Miho that Mashiro draws in class is “Photo-realistic”?

But yeah, this is off to a good start, meta-jokes, dullness and all, and I’m really looking forward to see where this story is headed. I hope you are too.

If you want to support the mangaka, or support the current Mangaka in the roster at Shonen Jump, please consider subscribing to Shonen Jump. it is 1.99 a month, and that does help the people drawing those comics.

Until next time, I’m Eric, and I hope to see you again with a Death Note in hand.

Miho has a crisis in today’s chapter. What will she choose? Find out in this read through. 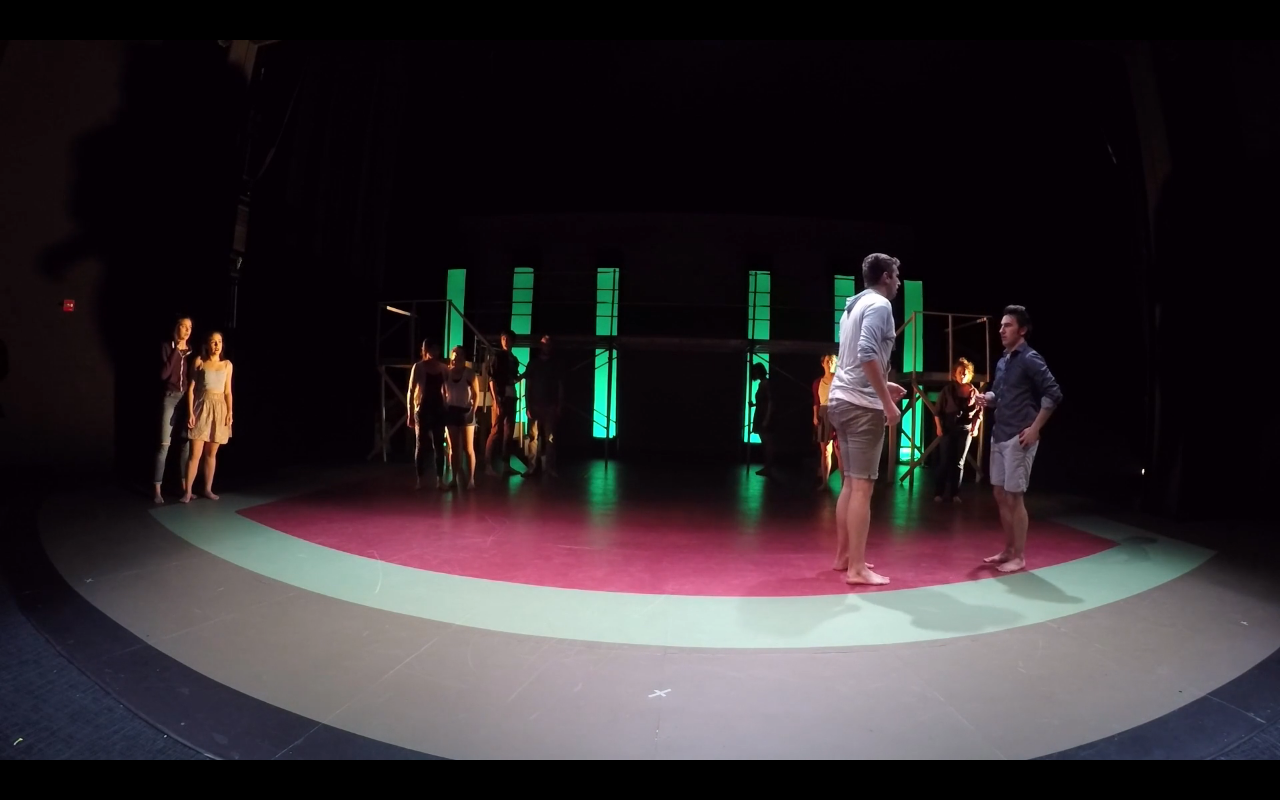 “we shall be free; the Almighty hath not built Here for his envy, will not drive us hence: Here we may reign […]

The Dumb Will Not End. Oh God Why.