Fuck, it got hot.

There is something about summer suddenly rushing onward, without any consideration for what’s here; summer rushed because it took its sweet time getting here, wending weary ways along April showers, and somehow bypassed Le Sacre du Printemps entirely, much to my disappointment.

My mood tonight is free-jazz, and my heart is pumping sanguine beats.

I thought about Kendrick Lamar today, and my struggle to enjoy his music. It’s not that I hate him, or that I think his music is bad; actually it’s literate, rebellious and super on point. But I just don’t vibe it. And that seems to no longer be good enough. Instead of listening to a record, setting up your particular groove – whether that be a nice vinyl cut, some sweet ass-headphones open back for premium mindfulness music, or just an iPod – there is a growing lack of acceptability of just listening to a piece of music, and having no reason for liking it.

A lot of things I like are for no reason at all, which is the best reason, honestly.

I am Hindu to the bone, but man, Lao-Tzu dropped mad-truths. The universe in its requisite is straight chillin’ in the Taoism…unless you’re all up in the Upanishads, and love yourself some Brahman (not to be confused with Brahma). But Lao-Tzu’s old, accreted and untraceable ideal was the basic idea of balance, harmony, but more importantly the role of dichotomy in reality.

Because, if we’re being honest, up is down, if you look at it the right way.

If there is a reader I don’t know about, I imagine that last sentence was mighty frustratin’, so let me walk you through that particular logical conundrum.

But actually, no. that wasn’t the way
The tao cannot be quantified
And you cannot
Look through some magical
Lens of reality and suddenly
Taste the fruit of enlightenment

That’s just way too much effort, and I’m here to ramble more or less incoherently.

If you’re heading south, you’re technically moving forward, because you are facing forward. And if your orthogonally challenged, like myself, then that means up, because metaphors.

When you face that direction, that direction is always, incontrovertibly forward. It may not be the forward on the map though. You could be moving toward the southron horizon, moseyin’ along the plains and the planes are flying high above you. And you see blue sky and…wheat fields for days. In this place, forward and backward are irrelevant; only the asphalt truth of the road matters in any meaningful way.

But it’s only determined that you’ve gone backwards after the fact. The truth of it is you were walking in a forward direction – to your perception – and suddenly you realized that the direction reality was pointing was behind you.

Which, if you’re following along (and I don’t sound like a crazy person) is backward. Forward was backward, the whole time.

You took a wrong turn, and ended up on the wrong side of Minos who’s ready to wrap his tail repeatedly around himself to determine which place you gon’ end up at the end of all of this. With the fires licking your ass like some Hieronymous bosch painting.

Ok, that was trying too hard.

But my friend, my companion, the old master. He saw what I illustrated poorly: if you’re on the spectrum of existence, you’re on it. The demarcations, the delineations, the parsing out of passing particles pointing pathways polar opposite of each other are just a singular state of being. The wind knows know limits; it only knows how to blow.

And that, that’s kind of beautiful.

I wish I knew where I was headed with this, but it’s been feeling like work for so long, it’s nice to go forward, and then find myself moving in reverse, down the long forward wheat plain that occupies the space between tomorrow and the landscape of my dreams.

Howdy, everyone. I was going to post my recent read-through of the latest chapter of Bakuman today. However, I have been a […]

Today we discuss that famous phrase yoda said and why it matters.

The cool salt air stirs Sprays green quiet And she watches the clouds gathering, growing, grinding Waiting for the teardrop wet to […] 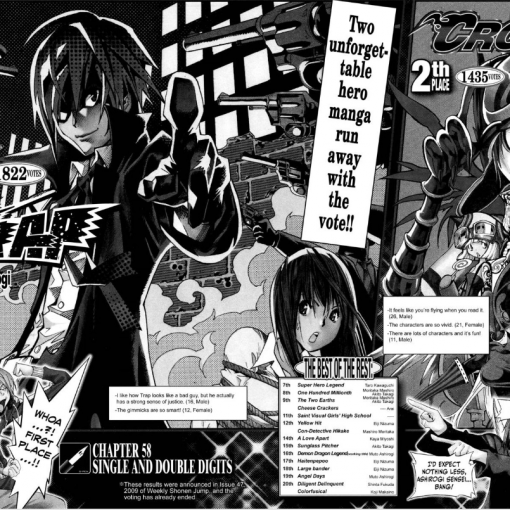 My favorite Gimmick and some genuine shocks, today in Bakuman Chapter 58: Single and Double Digits