I’m not a member of the LGBTQIA+ community. I’ve never been shunned for my sexuality, or otherwise bullied for it. I’ve never suffered the court of public opinion, or any sort of discrimination. But…

I was diagnosed as having Schizoaffective Disorder, Bipolar Type at the age of 18. A scary diagnosis that earned me discrimination that I will never fully grasp. As a result of the illness, I experienced judgement by the court of public opinion that is so well focalized  in this piece. I was isolated, intentionally, and otherwise, and I became horribly conscious of it. I also fought the fact that I had this illness for a long time. It scared the ever-loving crap out of me. I scared myself. And I closed myself off, to prevent others from seeing it. Like the main character I made forays into love like a hopeless romantic, only to get bitch-slapped by a number of realities to situations over which I had no control.

While watching, I noted that the lighting had unintentionally cast very large shadows of the performers, just left and right of the proscenium. The story played out in light and shadow, intentional and unintentional; overlapping harmonies all over the place. I felt like those larger than life, unintentional shadows.

The effect, to see Noah – played wonderfully by Matt Kyle – suffer hate and rejection, first from Justin, then from other people, and then, finally, himself, in the form of a hellish red-tinged dance argument with his shadow bore its way deeper into me than I expected. I was shaking as I saw my emotions writ large on stage. I was a guitar, and the performance was a finger plucking a staccato chord of heartbreak and hurt. To see Catanella’s portrayal of Justin’s cold indifference after the night of passion…

Well, let’s just say it all hit, pretty hard. The good kind of hurt, though. In the absence of dialogue – save one poem performed by Shannon Sweeny – I was allowed to feel those things fully, and viscerally, without prompt and without judgement. Catharsis at its most abject.

Which made the piece’s triumphant ending – of being Enough – a satisfying conclusion, that finalized the fractal of continual recognition, understanding, and resonance: while I watched, the mechanism clicked, and I spoke the language of the piece. A language of self-love.

To cement this understanding, “Act II” – a discussion of the piece facilitated by Business Director Jana Jacobson, and Community Collective member Andrea West, served as an almost too perfect cap to the evening. To put the piece in perspective was a more rewarding Act II reversal than I could have hoped for. The silent resonance became vocalized, and came as an infinitely more powerful reward than just the piece itself. A transcendent ending to the evening, and a literal connection.

I love these guys, because they’re companions with their darkness; they’re friends with silence and shadow. They tell stories in the negative space. While I do have minor issues with some of the super-structural flow – some things move a little too quickly – the overall effect is too powerful for me to harp on them. Even as I sit writing this review, I feel that night still.

This review is definitely getting too long, so I leave you with the following thought:

In the morass of voices that bombard us on a regular basis – whether that be culture, friends, your family – we are told that darkness is bad; that it is evil. We are taught to avoid darkness at all costs, that to fall into the shadows will be our damnation. We are told that to walk in the shadows is sinful, evil, and offensive. So we wield swords against those shadows. We find an excuse to repress, to push down the impulses and reasons; to fight to the death. We resist those dark spots that walk in our wake, in the hopes that they will disappear, even though we know they won’t.

You can dance with it.

You are enough; now go kick ass in the shadows.

Until I get lost,

If you’re interested in attending an Movement SLAM, open to the public, you can join Paradise Lost at Studio 550 at 8 PM, January 12th, or 26th.

Finally, if you are interested in seeing a performance of Enough, it will be performed again on January 28th as part of a fundraiser. Information about the event can be found here: https://www.facebook.com/events/1267285890005211/

Rage. Just. Rage. Find out why Rage in this read-through of Chapter 46.

This story chooses to look at the reality of the dream factory; and man, if that ain’t the shit I love most, I don’t know what is.

New and Old faces at the holiday party, and lots of awkwardness in Chapter 37: Executive Director and Songbird 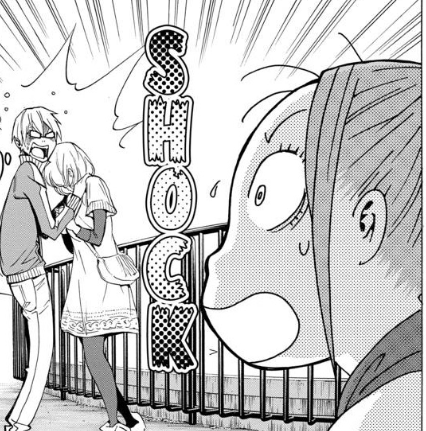 Rom-Com’s are all the rage in this chapter of Bakuman. Find out why in today’s read-through